The ancestors of theHol(c)kema family were knights living in the north-western part of Friesland.Nowadays the isles Texel and Vlieland are in this area. Earlier this part wasland and a delta of the river "IJssel". According historical documents theHolkema were owners of great estates in this part of Friesland that was aroundthe year 1200. The Holkema's digged , just like other estate-owners, canals fordrainage throughout the dunes. One day there was a big storm, the water of theNorth Sea overflowed the estates of the Holkema family. A great part of theestate flowed away and the isles Texel and Vlieland came into being. The Holkemafamily owned two castles in Friesland; one castle in the area now calledVlieland. In the year 1268 this castle was plundered and destroyed. And lateron in 1500 anothercastle in the village of "Achlum",this castle disappeared in the 19th century.In the early days the spelling of surnames was not so important as nowadays. TheHolkema, Holckema, Holckama and Holcama are the same family. The Holkema familyis a very old family and traceable until the year 1200 (Vrieslandt Chronicle).Between 1200 and 1500 there are no records of Holkema found yet.
In the 1500's the Holkema's showing up again in present Friesland.
Early Holkema ancestors
The arms of the Holkemafamily exists on the left part by half of an black eagle. The right part of thearms consists of two parts: the upper part is a like the letter "A", but this isan ancient Germanic sign; the lower part is a picture of an acorn on a blue background. 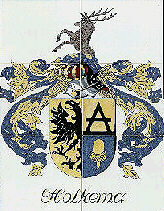 The Holkema family isvery good traceable in ancient history because of the Germanic sign in the arms.This Germanic sign was the precursor of the arms of the Holkema family.This own brand is from before year counting and used by families or a individual person.It was an easy to draw sign which could be used on official papers and owned properties for people who could not write; but also used on grave stones.The own brand was enherited from father to son lot's of times with a slight change like an extra line.It was in common use by frisian people. Probably with it's origin in the rune signsThe arms are designed at the time that Napoleon was ruling the waves in Holland and agreat part of Europe. The half of the black eagle in the arms gave the owners ofthe arms some privileges like passing borders easier. All origin Frisianfamilies were allowed (by Napoleon) to have that eagle in their arms. The origin of the black eagle lies in the old german holy roman empire (double black eagle).The acorn on the blue background means that the Holkema family owned forests on sandy aeries with lot's of water.

Genealogy of the Holkema family

You can find the Holkema family tree by clicking on this linkThe Holkema family is related to Haring Donia.Other famous an important descendents of Haring Donia (so also related to the Holkema's) are Jancko Douwama also a frisian worrior and Ygo van Galama and the Van Aylva family.The van Galama's and Van Aylva has brought lot's of mayors in Friesland.The van Galama's are many times related trough marriages to the Harinxma's (thoes Slooten,thoe Heegh etc.) ,also a family who has brought lot's of mayors in Friesland.The connection between the Donia's and the Holkema's is Pieter Fransen Holkema (son of Frans Willems Holkema and Eelck Pieters) who married Meijncke Daniels van der Leij.Meijncke Daniels van der Leij is a descendent of Haring Donia, trough Bauck van Harinxma who married Hans Tietema.A son of Pieter Fransen Holkema named Frans Pieter Holkema became a priest by styding with the help of the Dr. Douwe Tietema scholarship.

Start early and continue is the only manner to become a patriciër. First of all the family must have performed six generations long. In the official terms of the central office for the genealogy: you must have played "a prominent role in the Dutch society". This does not mean that all members must finish to finish as a minister-president, but a considerable percentage is possible successful intellectualsor artists can be usefull .Then the test for a commission of the central office for genealogy comes. If they decide that that the family tree is acceptable, possibly after precious additional research, then the tree will be placed in the "blue booklet ", which official is called "Nederland's Patriciaat". From 1910 to 1998 81 issues have appeared. After publishing in the ' blue booklet ' the account follows, depending the size of the pedigree: how more pages which confiscate, how more expensive. The Holkema family has endured this test and has been already placed in "the blue booklet"
Goto the Holkema patricier page
Official website of the

Dr. Douwe Tietema scholarship
Familymembers mentioned in the familytree can apply for this scholarship !

Here are some famous members of the Holkema family: 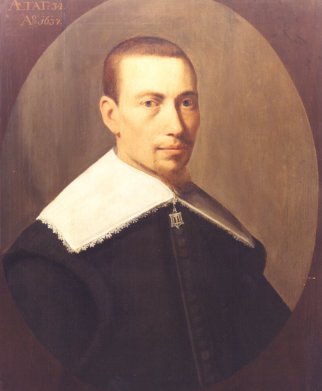 One of the oldestmembers of the Holkema family is the Friesian poet Gysbert Japicx (1603-1666)born in the village of Bolsward (Friesland). You can achieve an originalhandwriting of this poet buy using this

Hisfather named ,Jacob Gysbert, was a chest-maker by profession, but he was alsomayor and deacon, he belonged to the upper part of society. Jacob Gysbert wasthe builder of the city hall of the village of Bolsward (this was built in1614-1616). On the door of the council chamber is written that Jacob Gysbert wasthe designer and builder of the city-hall.Jacob Gysbert and his wife, AnckeWillems are buried in a church named the "Broerekerk" in the village ofBolsward. Their thombstone can be seen in the southern wall of this church.
A painting of GysbertJapicx Holkema can be seen at the "Frisian Museum" in City of Leeuwarden(capital of Friesland). The painting is of the year 1637. Gysbert was then 34years of age. This painting has been painted a year after his marriage with awoman named Sijke Salves Nicolai; a daughter of notary Salvius Nicolai who livedin the city of Leeuwarden. The painter was Matthijs Harings (ca.1593-ca.1665).

A museum was erected for Gysbert Japicx Holkema in the city of Bolsward.